Fireworks — some of my earliest childhood memories are connected to the fireworks after the local autumn fair. As children, we were allowed to stay up late. Very late indeed. We were 3 or 4 years old. And we waited, waited, waited for the fireworks to begin. Suddenly the first one goes off: Bam!

The darkness of the sky bursts into hundreds of coloured stars, exploding into gigantic flowers and thousands of tiny drops of golden rain.

During the baroque era, each and every festivity ended with fireworks.

I’ve discovered a series of how-to books from 1800s experts, describing how to create beautiful, impressive fireworks. But why isn’t there a novel about a fireworks expert? It contains all elements which would make the novel a gripping one. Such as …

Glamour. Banquets! Festivities! Music! Dancing! Food! Beautiful women in beautiful dresses! And then — as the culmination point of the evening – the fireworks.

Drama. What better place to create intrigue and conspiracy, than a banquet, when everyone has gathered in one place?

Love. Flirting while you dance. Touching your love interest for the very first time — but it’s in front of the eyes of the chaperones … do I need to say more?

LET ME ENTERTAIN YOU. The story of a “parvenu”?

Who will your protagonist be? Either it’s a likeable, good, honest boy – striving hard to work his way up into the upper classes. Or, it could be an obscure, devious man. Someone who is eager to take advantage of the countless possibilities, which the new position as a fireworks expert brings?

Is he some kind of BEL AMI, who seduces rich women?

Is he ambitious, greedy, selfish — in a word, a MR RIPLEY of the fireworks industry?

Think of all the possibilities for telling this story.

* Rooted in a poor family of origin, this young fireworks expert suddenly gets the opportunity to enter the world of the rich & famous.

* He has the ability to himself work up — by simple virtue of his talent for entertaining people with money!

* But he will always be stuck “between worlds”. The poor and the rich. He will never fit completely among either. His family & old friends mock his new behaviours; his new employers will always look down on him.

* Is his character irrevocably changed by his endeavours? Does he actively, fundamentally change his personality? Is he someone who tastes blood and wants MORE? Does he steal? Does he murder? Is he driven by greed, and eventually ruined by it?

And think of the potential antagonists.

Is there another fireworks company trying to steal their secrets? Oh, all these possibilities to create tension between several hostile companies! WAR in the entertainment industry.

Also, this plot allows you to narrate fundamental change in British and European societies. Essentially, new knowledge from China seeps into European minds.
Fireworks is just one aspect of this global trend. You could tell how the British/German/European high societies subsequently favours Chinese trends. Porcelain, ceramics, clothing — and not to forget: tea! — were imported to 18th century Europe. Precious foreign plants like the red rose, hibiscus and rhododendron were planted in English gardens for the first time.

Are you interested in receiving additional background material from this era?
* A list of reliable historical, original sources and books worth to read, maybe?
* Original images of a 1800s German fireworks “graduation test”? Because before you could call yourself a licensed fireworks expert, you needed to take a test. (Yeees! We Germans have a test for anything and everything).
* And even more original fireworks sources from my latest research trips to German and French museums.

I am thinking of creating a larger resource on this. If you’re interested, contact me. Greetings from Germany to you,
Barbara 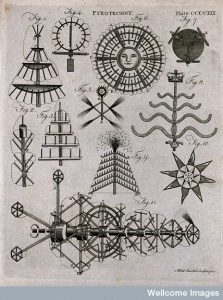 Pyrotechny: various designs for fireworks. Credit: Wellcome Library, London. Engraving by A. Bell.
after: Andrew Bell via CC BY 4.0, no. V0023734EL. All of the images come from the Wellcome Library London. I wrote about how this image database can help you to conduct research for your novel here.